Tucson is a GEM of a town…at this time of year…in normal times at least!

We would normally be there right now, like we have for 27 years…enjoying the beautiful sights of rocks, minerals and gems from all over the world

Our gems aren’t in Tucson right now but over 5,000 of them are certainly available online at www.colorfirst.com (link in bio) – learn, search and design 24/7/365 at your convenience…

SPECIAL OFFER – use coupon code WEMISSTUCSON to get FREE SHIPPING on all domestic web orders until Feb 28, 2021!*

Stay strong, stay safe and have a great week ahead!

It’s hard not to love inclusions when they look like this!

Sometimes Quartz and other minerals have internal cracks that may contain liquid or gas. When light reaches this inclusion the liquid or gas splits it up to create a rainbow effect

Without inclusions, it would be impossible to distinguish some natural gems from synthetics. Origin is almost always derived from studying inclusions that are typical of known localities and mines.

So inclusions are not only important but also can be beautiful. In the world of Colored Gems we’re never looking for loupe clean stones; eye clean is perfectly acceptable.

Small inclusions that don’t detract from the overall beauty of the gem really aren’t an issue. If anything, they may make the gem more affordable!

These Umbalite Garnets, like many gems from the Umba Valley are so light-sensitive!

It’s somewhat counterintuitive to appreciate that objects (including gems!) don’t inherently have any color, as observed by Isaac Newton. The only colors that humans see are the colors that are reflected by objects. All the other colors that make up light are absorbed by whatever we’re looking at.

We recommend that all gems be seen under different lighting conditions as most gems will vary from daylight to artificial light to dim light at nighttime events.

Daylight varies from location to location and its intensity depends on time of day. For example, a stone seen at midday on a clear day at the Equator will inevitably look brighter than the same gem seen on an overcast day in winter in the Northern Hemisphere.

The types of lighting used make a significant difference to the appearance of gems.

Today’s LED bulbs operate at different wavelengths than the incandescent bulbs and florescent lights that many of us grew up with.

Additionally, each screen has different specifications and shows gems a little differently. Desktop monitors may show the same gem very differently than a cellphone screen or tablet.

And of course, our eyes. We can only see the visible part of the spectrum between ultraviolet and red light. Each of us perceives color a little differently and it is estimated that we can distinguish up to 10 million colors!

Always buy the gem that speaks to you…COLOR FIRST!

A small part of the sandstone cliff breaks and falls into the Colorado River in the natural process of erosion.

The sandstone in the Grand Canyon area is believed to have been deposited between 200 million and 2 billion years ago in what would have been warm, shallow seas.

Plate tectonics then led to the uplifting of the whole region into the Colorado Plateau approx 2 miles high, some of which is slowly being eroded away here.

Nature continues the process of Creative Destruction, turning mountains into mud, into beds of sandstone, into raised plateaus and slowly back into mud.

This, combined with magma from deep within the earth, occasionally leads to conditions that are favorable for mineralization, giving us the beautiful crystals and gems that we love and cherish…

Two gems for the price of one!

Working on this phenomenal piece of Color Change Sapphire rough, from the Umba Valley, Tanzania, which is currently 24.51cts after some sawing and fashioning.

Completely natural with no treatments of any kind. This gem is blue in florescent light and turns to purple in incandescent light.

One of our favorite stones to work with, when we can get our hands on a gemmy piece. 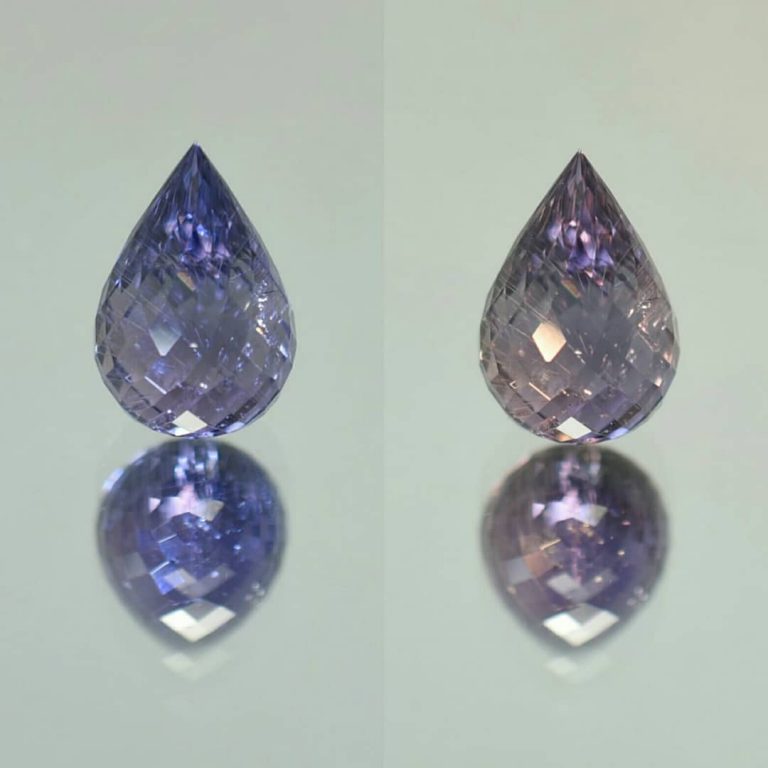 Two gems for the price on one!!

Scroll across to see its color in daylight, or better yet come and see it in person at AGTA 900 in Las Vegas….!

Natural, untreated from the Umba Valley Tanzania. The image on the left is under florescent light and on the right is the same gem under incandescent light. This gem displays flashes of both colors in daylight, which can be considered a third color.

Sizes above 5cts with good change are very rare.

Sapphires and Rubies are the same mineral – corundum. When corundum is red it is called ‘Ruby’; when it is any other color it is called ‘Color” followed by ‘Sapphire”, e.g. Blue Sapphire or Pink Sapphire.

Sapphires are September’s birthstone and their variety of colors offers so much choice! They also celebrate the 5th and 45th Anniversaries.

Mesmerizing play of color in this Opal Rough from Wollo, Ethiopia. Natural, untreated.

This is very select rough that is in the initial stages of processing. Next it will be sawn and/or roughly ground to remove the surface clays.

Then the stones will be rough preformed to orient them to display the best play of color for each piece.

This part is tricky since this is hydrophane opal. “Hydrophane” means the stones absorb water when they are in contact with it and turn colorless!

And you certainly need water when sawing, preforming or faceting stones. At that point the opals look transparent to translucent and much of the play of color is lost. Good thing it’s only temporary! The opals dry over a period of a few hours (and sometimes longer) and the beautiful play of color appears again! Phenomenal!

They will then be cut and polished into cabochons with various shapes. The last stage is final quality control before being offered for sale.

Juicy rough that looks like candy makes us hungry!!

Scroll across to see the individual pictures. These stones have been selected from large parcels and are of the very best quality for each group.

Next they will be clipped or sawn where necessary to produce clean, blocky pieces.

After some initial rough preforming to determine final shape (e.g. oval, cushion, round, trillion, etc) they will be fashioned into full preforms ready for faceting.

Some of them will be chosen to make matched pairs, layouts or suites where possible.

Once they are faceted, polished and inspected for quality control they will go through the final grading process before they are ready for sale.

The process from mine to market is elaborate and it takes experience to produce fine quality finished gems.

Showing a select piece of Umbalite Garnet rough and in its rough-preformed state, 14.36cts currently
Natural, untreated from the Umba Valley, Tanzania
Like many of our gems, we work with this material from the rough, sorting and grading it for color, size, shape and clarity, before faceting it into different cuts and qualities. ▪
The next step would be final preforming followed by faceting and polishing, before final quality control and grading.
The process from mine to market is elaborate and it takes experience to produce fine quality finished gems.
See this and many more Umbalite Garnets at AGTA 1205, Las Vegas Convention Center, South Hall, May 30 – June 3.
Umbalite is a trade name for a pinkish-purple garnet from the Umba Valley, Tanzania.
It is a relative of Rhodolite and Malaya garnets – usually being a mix of Pyrope, Almandine, Spessartine and occasionally Grossular Garnets.
Almost all gem garnets are a mix of two or more species.
Pure Garnet would be colorless; it is the trace elements that give garnets their colors. For example, iron and chromium creates reds and greens; vanadium creates greens and manganese creates pinks and oranges.
Garnet is the birthstone for January, celebrates the 2nd anniversary and comes in almost all colors of the spectrum including the rare color-change.
Lots of choice for January birthdays!
www.colorfirst.com ▪